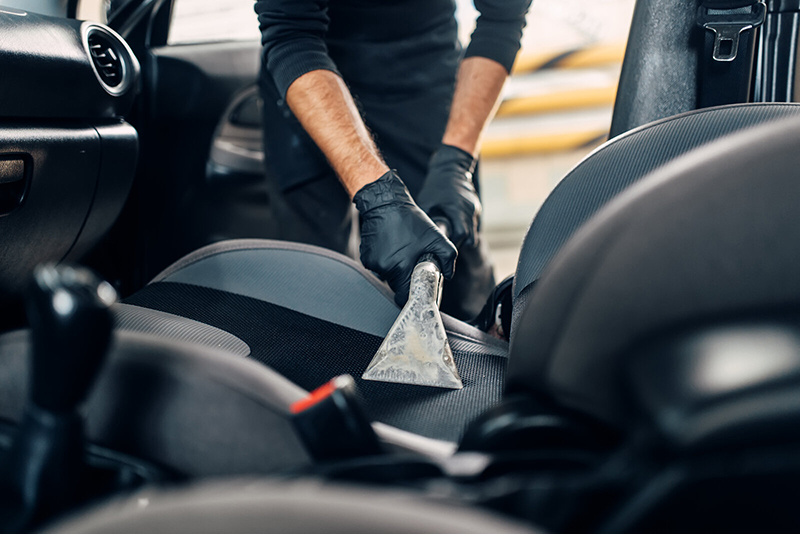 There are many unpleasant odors that can make their way into your car: wet dog, damp carpet or upholstery, old gym bags left open in the trunk — the list goes on. Perhaps one of the most pervasive and unpleasant odors, however, is that of smoke.

Whether we ourselves smoke or not seems to be irrelevant, it seems that many of us will encounter the problem of a smoke smells in our cars. It could be that a friend or family member has smoked in the car while they or you were driving. Another possibility is that you purchased a used car with smoke smell embedded into the car after years of another driver’s use. You may also pick up acrid smoke smells if outdoor smoke gets into your car when you leave windows open during the summer months.

Never mind how the smell got there. The important thing is how to deal with it, right? For some, it can appear a hopeless situation. They either scrub and scrub and scrub with harsh chemicals to remove the smell, or try to cover it up with excessive air freshener. The fact is that neither of these approaches will work in the long term.

If you’ve dealt with this problem before, you may have used every car detailing trick you know, carefully cleaning the car’s interior, shampooing the seats and carpet, wiping down the dashboard, even cleaning out the cupholders. When you first get in the car after detailing, it smells great. At that point, the smell of the cleaning products has simply superseded that of the smoke. Unfortunately, however, the smoke odor is still there lingering under all that fresh cleaning product smell.

It’s the same story with fresheners. New air fresheners are powerful and fragrant. They have enough of their sweet-smelling essence to cover up the smell at first, but sooner or later they diminish, allowing the acrid taste of smoke to return.

What drivers need is sound advice on dealing with smoke smells. That is what we deal with in today’s piece.

The first piece of advice for DIY detailers trying to get rid of smoke smell is to shed any illusion of how easy or simple this process can be. No matter what anyone says, there’s no substitute for patience and persistence when it comes to removing smoke smells. You might be ready to lose that patience after the 10th or 20th cycle of washing and shampooing the car, but you have to hold your nerve.

One trigger to our lack of patience is that because we use the car daily, it’s harder for us to notice the difference in the smoke smell over time. It takes an unaccustomed nose to sniff out whether or not the car is better than it was before. Consider asking a friend to smell the car before you clean, and then ask them again every month or so to see if they notice any difference. If there is one, they’ll detect it.

This will help encourage you that you are making progress. Only by keeping up your interior detailing routine can you ensure that you remove every layer of the smell until it is completely gone.

Once you’ve set your mind to the long-time task of cleaning out the smoke odor, you need to ensure you have the right tools. Typical car shampoo on its own probably won’t be enough, especially if the smell is particularly pungent or acrid. Some other tools you might consider include (but are not limited to):

These tools will greatly enhance your anti-smoke arsenal. First, the steam cleaner is a great tool for the seating upholstery because it gets deeply into the fabric without being abrasive or aggressive like some chemical items. It cleans and sanitizes as it goes, ideal for dealing with that pesky embedded nicotine and the other substances contributing to the odor.

Powders are also an interesting alternative to liquid shampoos or other detergents. Products like OxiClean work by you leaving the powder on the fabric over a period of time, possibly overnight, and the vacuuming it up afterward. They work very well, and leave a nice fresh scent without being abrasive or damaging to seat fabrics. One thing to watch out for, however, is that depending on the exact contours of your car’s seats, the powder can get itself into some tight spots. This means you need to pay extra attention when vacuuming to make sure you get it all up.

Another great weapon is that of the “bomb” variety. Turtle Wax is a well-known brand with a product like this, the “Odor-X,” as does Meguiar’s with their car air freshener spray. These work by releasing an aerosol that not only works is ways into areas affected by smoke smell, but will also be effectively circulated by your car’s air conditioning system. This mechanism helps the stuff to get everywhere it needs to be, and the circulation helps to move smells out of your car.

Finally, perhaps the ally you’d least suspect in a fight against smoke odor — white vinegar. This common household compound is actually quite the star in the world of cleaning. You’d be amazed what you can do with this stuff. Applying some white vinegar to a towel and then rubbing it into the affected areas after you’ve completed your regular cleaning routine will help a lot.

In our first tip, we mentioned how patience and persistence were important. An additional virtue in the battle against car smoke smell is being systematic and consistent with your cleaning routine. You can’t afford to cut corners, nor can you change up the routine each time. As a professional detailer would do, establish an order of cleaning and then stick to it each time. Being thorough and approaching things methodically will eventually lead to victory.

That nicotine and the other contaminants that have embedded themselves in your car can only be removed in a steady war of attrition. It’s impossible to simply pull them out in one go. Each attack you lay down on the smell is wearing away some of its ability to stink up your vehicle. Keep up the routine, and sooner or later you will start to sense the results.

When you smell smoke in the car, it’s natural for you to assume that much of the odor must be trapped within the seating upholstery and carpets. In fact, you’re not wrong that there does end up a great deal of the stuff lodged in there. Don’t forget, however, that smoke from cigarettes rises upward, which means one place that actually bears the brunt of the smokey punishment is the car’s roof liner.

The roof liner presents some tricky aspects when it comes to cleaning. For example, your steam cleaner is not a good tool to use on the liner, because the heat from it can adversely affect the binding glue. That tool is out, then. Powders may not stick up there, either, leaving your floor, dashboard and other areas strewn with falling powder. All of this means that you should pay extra attention to the roof liner with your other viable cleaning products. Always remember to include the roof liner in your detailing routine.

If steam cleaners, white vinegar and cleansing powders are the “big guns” of the anti-smoke detailing world, then an o-zone machine is the nuclear option. Professional detailing outfits make use of these machines in their fight against odors in your car, and that’s because they are arguably the most effective.

An o-zone machine (aka o-zone generator) attacks smells on the molecular level. They’re used mostly by those working to effect repairs after floods and fires (when the smells get really bad), and also by some professional car detailers as mentioned above. The machine works by converting oxygen (O2) into o-zone (O3), which it then circulates around your car to push that o-zone into contact with the embedded smoke particles. The o-zone particles then react with the smoke particles, causing rapid oxidization, which helps to get rid of the smoke particles naturally. It’s like airing out a smokey-smelling shirt on the line outdoors, but in fast-forward mode.

An o-zone generator is the kind of heavy-duty equipment that removes the most pernicious smells from public spaces. Southeast Asian hotels swear by these machines to free their rooms of durian smell after bad guests smuggle in this delicious but controversially smelling fruit. They may not get rid of everything in one go, but they work effectively as a tool for speeding up the process. Where these machines were once bulky, they can now be purchased in neat, compact units. They are still not so cheap, however, and will likely set you back $100 or more for a quality item.

Our final advice is to remember not to fall for marketing hype from detailers or individual products. Anyone who promises to permanently remove smoke smell from your car in a matter of hours is being dishonest. A professional detailer should know that it would take multiple cleanings to remove outright. You’d expect producers of cleaning products to know this truth, too. Still, the claims are made and we the consumers are frequently disappointed.

Many of the products that hype themselves up will actually work over time, but just not in the miraculous windows of time that they claim. Sure, they will remove the smell for a time, but once the light of the sun warms your car back up, you’ll find that the smell starts to creep back in. This is why marketing hype is absolutely no substitute for persistence, a careful, systematic approach and the will to go on to the end!

Probably the biggest mistake that people make when it comes to cleaning up the smell of smoke in any car is giving up too soon. It can feel like a hopeless uphill struggle when you’ve washed a car multiple times only to find that the odor that you’re trying to get rid of just keeps coming back. In truth, it can take months for the smell of smoke in cars to be removed completely. Being persistent and systematic is everything in this battle.

Only when you keep calm and carry on will you reach that desired goal of a smoke free car. Imagine it like peeling an onion. Each cleaning only removes one “layer” of the smoke smell, but sooner or later you will get all the way down to the center.

Guide to Understand and Remove Scratches from Car Paint