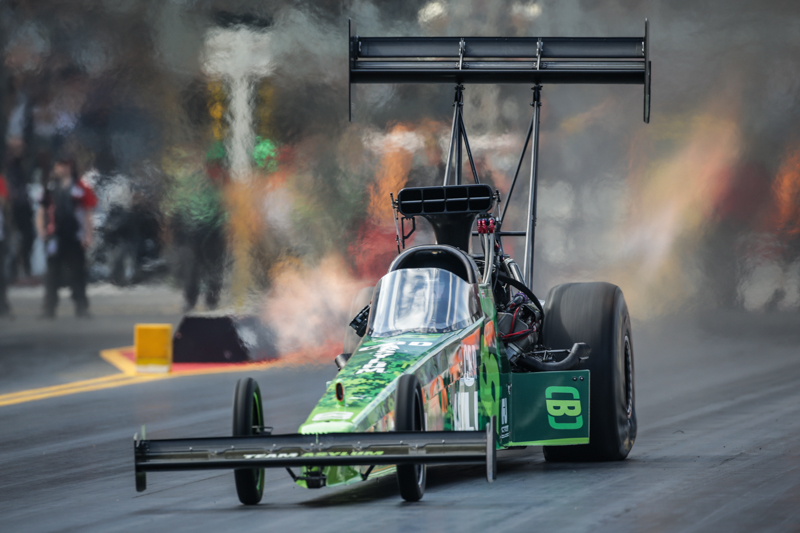 Drag racing is one of the most unique motor sports in the world today. From its roots in the United States, it has steadily taken root around the world as a showcase of horsepower and automotive prowess between competing teams.

Among the most unique and well-known things about drag racing is the fact that there’s no circuit to complete like in Formula 1. In fact, there aren’t even any corners for the cars to navigate. It seems that all they have to do is travel in a straight line, which to some outsiders seems like quite a fruitless and unchallenging endeavor.

Those who would make claims of drag racing lacking skill or challenge have clearly never heard of the most high-powered vehicle that traverses the straight-line track. These are the top fuel cars. When you learn about what’s in these cars, it can blow your mind. The horsepower and forces of acceleration that these drivers deal with makes it a miracle that they can stay on the road at all.

In today’s article, we’ll be looking at the various parts of the top fuel car in turn and exploring what makes them tick. We’re sure that if you were once skeptical as to the sheer level of ability involved in drag racing, you won’t be after reading today’s article.

“Top Fuel” is one of the car categories as listed by the National Hot Rod Association (NHRA). They are often viewed as the pinnacle class in drag racing, and as a sort of automotive king over all other race cars. When you look at some of the basic facts about top fuel racers, you can start to see why people think like this:

Top dogs they may be, mechanically speaking, but the history of the category has hardly always been glittering. After years of controversy in the sport, by 1984 there were so few people entering the category, that they had to cut down to 8-car rosters. A full roster for a competition should be 16 cars. After some timely intervention from race veterans Joe Hrudka and Don Garlits and their Cragar-Weld Top Fuel Classic competition in 1984, the category was finally turned around. By 1987, it was once again pulling in huge numbers, twice as many as they had available slots.

Far from being some kind of mad free for all to build the wildest, most powerful engines, the NHRA actually imposes strict rules on the makeup of top fuel car engines. These regulations have created an industry standard for basic Roots-type supercharged engine:

Don’t be under any illusions, however. While these engines work fundamentally according to the same principles that other combustion engines do (two valves per cylinder activated by pushrods etc.), they are made up of specially made parts. These are not items that you can find in your local hardware store.

Top fuel engines comprise a block machined from aluminum, with press-fitted, ductile iron liners. Cooling is not done by water, but rather by air intake combined with lubricating oil. Fuel is pumped by 42 injectors that can push 100 gallons of fuel in a single minute – can you imagine that? At the speeds it goes, the top fuel car will burn through 15 gallons just in those several seconds it’s on the track. There are 8 open steel exhaust pipes, each one about 18 inches long and 2.75 inches in diameter. Each one also contains a thermocouple to jeep track of the gas temperature (typically about 500 degrees Fahrenheit when idle, and 1,796 degrees immediately after the race).

Finally, the supercharger is a Roots style blower giving 65lbs per square inch, and a rotor speed of 12,450rpm. It’s not only the fuel injectors that are fast, because this turbocharger can move 3,750 cubic feet of air in a minute. In the end you get a picture of a mighty engine built for extreme acceleration and speed.

To give you some idea as to the sheer power of these engines, all you really have to do is spend less than a second watching a top fuel drag race. As the green light on the tree illuminates, the top fuel dragsters are launched. Within half a second — yes, you read that correctly — the cars are doing 74 miles per hour and have only covered 21 feet. By the time a full second has gone by, they’re doing 113mph while only 75 feet from the starting line. Another half second takes us to 162mph (that’s only 1.5 seconds so far). Add one more second to that, and the dragsters have already covered 420 feet of their run and are at 248mph.

You couldn’t fill these cars up at the local gas station. They take a mixture comprised of 90 percent nitromethane (or thereabouts) and 10 percent methanol (nitro). The oxygen atoms in the nitromethane and methanol give them a greater stoichiometry than typical gasoline used in race cars. This allows the racing team crew to control the power output by enriching the fuel to tie in exactly with the traction of the top fuel car’s tires. Should they get it wrong, however, it will just cause the tires to spin and start to smoke.

Rules from NHRA come into effect again when we talk about safety equipment in top fuel cars. The general rule in drag racing is that the more powerful the car, the more stringent the safety requirements. As the “king” of the drag racing classes, top fuel cars therefore come with the strictest rules. The background of a large number of rule changes is one of reaction to tragedy. Many of the newer rules came into effect in the wake of several fatal accidents, including (among others) Darrell Russell in 2004, and Scott Kalitta in 2008.

First, drivers’ helmets have to be full-face coverings and contain Hand and Neck Support (HANS) devices. The HANS device is a U-shaped carbon fiber polymer that sits at the nape of the neck with its two arms coming down over the chest. Its main function is to prevent whiplash and other severe injury that could be caused by sudden head movement forward or backward in the event of a crash.

Next, the drivers are fitted into their seat with a quick-release racing-standard harness while wearing a Nomex (or similar) fireproof body suit. In fact, everything worn on the body of the driver during a drag race has to be fireproof. Inside the car, there have to be fire extinguishers, as well as Kevlar blankets around any part that might shatter or explode in the event of an accident.

Other important safety requirements include things like nitromethane concentration not exceeding 90 percent, parachutes only being manufactured by specific manufacturers to the very highest-possible standards, tires made and maintained with at least 7 psi tire pressure, and the installation of roll cages surrounded by titanium to protect against flying debris. This last point in particular became important after the aforementioned death of Darrell Russell. His car went out of control after crossing the finish line and crashed, but it wasn’t the crash that killed him. Rather, it was a piece of debris that struck his head, despite him wearing a regulation helmet at the time.

One of the first things you notice about the exterior of the top fuel car is its length. At 25 feet long, it’s at least 10 feet longer than a typical sedan, and about 7 feet longer than a typical Formula 1 car. The outer part of the car is made mostly of chromoly steel tubing and carbon-fiber composite, in what is likely the most aerodynamic automotive design you’ll ever come across.

The shape of the car body, coupled with the front wing and high-elevated rear wing, together help to produce an amazing 5,000lbs of downforce. This gives those monster rear tires the traction they need to handle the break-neck speeds and acceleration. The driver experiences as many as 4-5 g’s as they accelerate forward.

It’s not hard to see why people think of the top fuel dragsters as the top end of the drag-racing ladder. With such power, precision and extreme skill involved in building, maintaining and handling. This is a category that’s not for the faint of heart.

Snap – What is Road Rage and How to Deal with It

New Electric Pickup Trucks to Look out For

The Truth About Car Body Kits